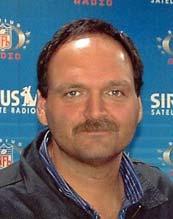 John H. Stagnaro, Jr., 44, a lifelong area resident, died on Monday, June 2, 2014, after a courageous battle with cancer. He was at home with his loving family by his side Born July 15, 1969 in Poughkeepsie, he was the son of the late John H. and Edna Smith Stagnaro. John was a graduate of F. D. Roosevelt High School in Hyde Park, and he attended both Dutchess County Community College and Marist College. He worked as a Superintendent for Metro-North Railroad in Manhattan for the past 15 years. John loved spending time with his family and cooking, camping and snow skiing. John recently restored a Jeep with his son and they enjoyed it so much, that they planned to do more. He was a former member of the Italian Center in Poughkeepsie, and the Rogers Point Boat Club in Hyde Park. He was also a former coach and player agent for the Taconic Little League. John really enjoyed going to his son John’s baseball games, and his daughter, Amanda’s crew races. He was so very proud of their accomplishments. On August 25, 1990 in Camp Hill, Penn., he married Renee Costanza. Mrs. Stagnaro survives at home. In addition to his wife, survivors include his daughter, Amanda, and son, John, both at home in Salt Point; sister, Claudia Rice and husband, Steven, of Salt Point; and nieces and nephew, Kimberly, Brittany, and Steven Rice, all of Salt Point. Other survivors include his sister-in-law, Lee Ann Costanza of Maryland; brothersin-law, Michael Costanza and wife, Kelsey, and Anthony Costanza and wife, Cory, all of Penn.; nieces, Ashley, Jacklyn, Caroline, and Lillian; great-nephew, Nathan; and great-niece, Lilyana. Calling hours will be 4 to 8 pm on Wednesday, June 4th, at Sweet’s Funeral Home, Rte. 9, Hyde Park. A funeral service will be 10am Thursday, June 5th, at the funeral home, Pastor Kregg Gabor officiating. Burial will follow in the family plot in St. Peter’s Cemetery, Poughkeepsie. John’s family respectfully requests memorial donations to the American Cancer Society, 121 Executive Dr. New Windsor, NY 12553, www.cancer.org To send an online condolence, or for directions, please visit www.sweetsfuneralhome.com.

Offer Condolence for the family of John H. Stagnaro